You can find it out in the wild, lurking in your public library, begging to be bought at your neighborhood bookstore, and (of course) prowling on your favorite online sales platform.

Don't take my word for it. You can buy your own copy here!

Alexandra Jacobs at the New York Times called it "endearingly nerdy," and also "rich and ruminative." The headline declares it is "deft and surprisingly lively." I can't decide whether to faint or blush... 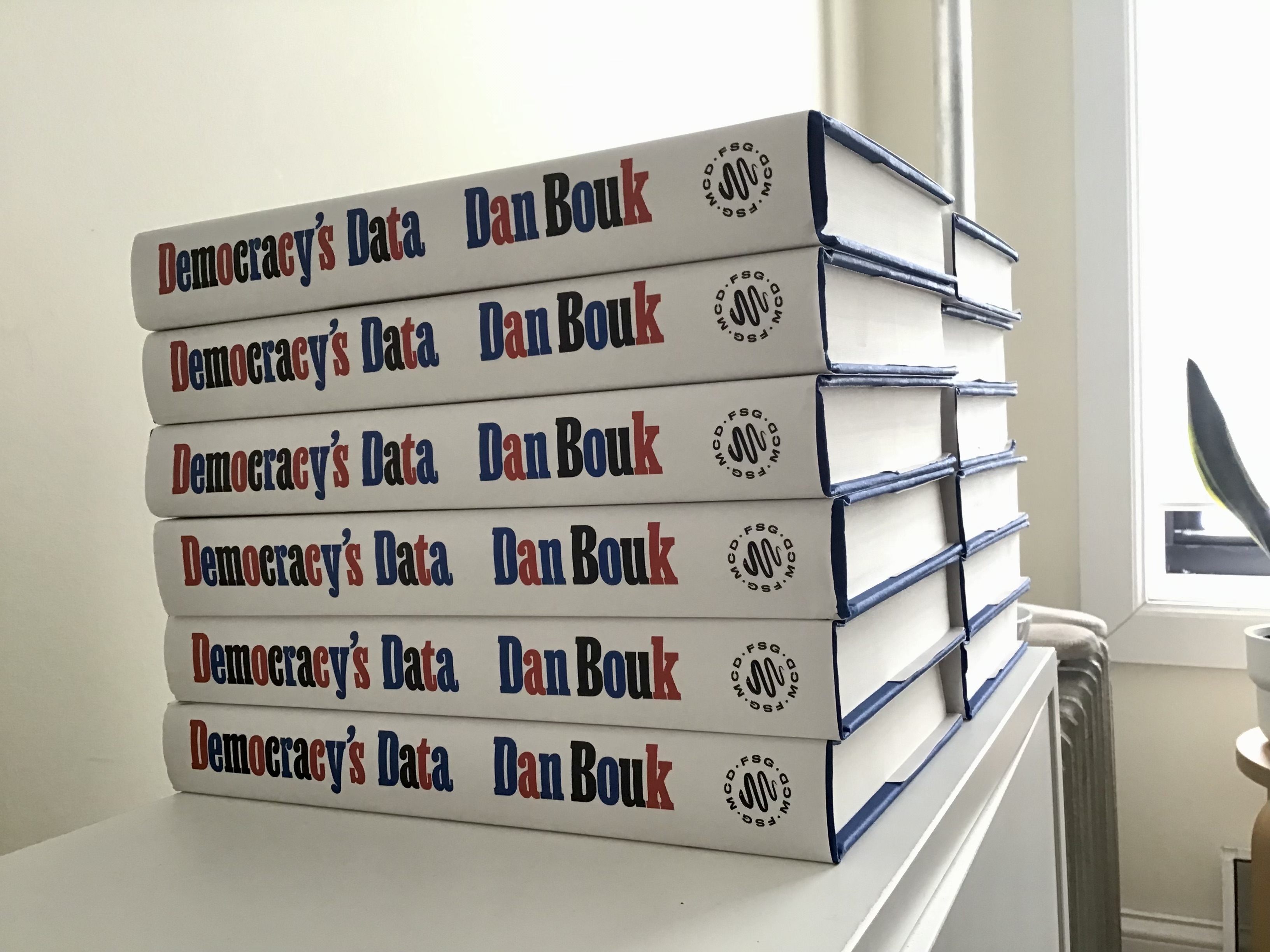 What's Up with that Beautiful Book?

Democracy's Data is a gorgeous object. That's due in large part to the cover designed by Ben Denzer. As the folks at Fonts in Use explain: "Bold compressed type combined with strategic color make for a memorable typographic image and an effective reading of a long title."

After were done ooh-ing and ahh-ing over a cover mockup, Robin Sloan and I set out to turn it into a data visualization. Click here to see the animated result!

Counting the population of America, it seems, is akin to both conducting a symphony and watching a jazz ensemble go to town...

The book’s straightforward title undersells its playful contents. “Democracy’s Data” is ruminative and rich; it makes the dull old census a feast for the senses.

Solid storytelling chops and a friendly tone help Bouk convince readers who might question just how interesting a book about the census can be. Surprise — it can be! In the hands of someone who understands it, the census is a mirror of the country’s ideals, values, flaws and attributes....

Bouk uncovers the great paradox about the decennial count: that it is an impossibly large and messy task, but also an awe-inspiring achievement."

A data analyst pores over the pivotal 1940 census and then zooms out, piecing together a revelatory biography of our national ritual, the 10-year accounting of the U.S.’s demographics and a once-in-a decade mosaic of the American people....A vibrant bird's-eye view of who we were and are and--most critically—-who we are becoming in the 21st century.

The practice of data storytelling often focuses on weaving a narrative by highlighting themes from a dataset. Author Dan Bouk flips this conventional practice on its head by instead telling a powerful story about the data itself.....

When we visualize various types of data and use those visualizations to tell stories, we should take a minute to consider the story of how that data came to be in the first place. Rather than uncritically assuming the objectivity of data we work with, this book calls us to strategically assess the frame of the dataset, the way in which the data was gathered, and how we are using it. This book is a crucial read for anyone within the data visualization community who wants to learn how to read the stories behind the data."

A deep dive into the 1940 U.S. census: how it was created, completed, deployed, and even weaponized and what it can teach us about American democracy....

A page-turning examination of why we need to understand the census and its wide-ranging effects.

The focus of Democracy’s Data is the 1940 US Census, but the story of why the House is locked at 435 members is one of those bonus pieces of context that make this book such a compelling read. This book is filled with details about US history and the history of today’s social problems—a history that today is largely untaught and rarely discussed.

These kinds of details, personal reflections and context-filling make Democracy’s Data a pleasure to read, and highly informative.

ELLEN ULLMAN, author of Close to the Machine

Dan Bouk's Democracy's Data is a revelation of the political and cultural forces that led to the 1940 census, and of the philosophical questions that underlie all attempts to classify people. What do we measure? And who has the power to decide?

Bouk tells us what is at stake: A battle for the very definition of personhood.

STEVEN JOHNSON, author of The Ghost Map and Extra Life

A tour de force of archival research that reads like a detective story, Democracy's Data reveals an entire secret history behind one of the most underappreciated institutions of modern civic life: the census. Following Dan Bouk through this riveting exploration of what it means to count and be counted has forever changed my understanding of the relationship between information and a democratic society.

RUHA BENJAMIN, author of Race after Technology and Viral Justice

A gifted storyteller, Dan Bouk reveals the political drama rumbling beneath a single census question and he illuminates the stakes erupting from a solitary statistic. It turns out before there was Big Data there was old-fashioned big data, no less political and consequential eighty years ago than it is today. The humanity behind the numbers has always mattered, but Democracy’s Data transformed my black & white understanding into technicolor! Everyone who cares about the plight of our democracy owes it to themself to read this essential book.

DANAH BOYD, author of It's Complicated and ethnographer of the 2020 Census

Who knew stories about government and statistics could be so engrossing?!?! Through intimate, finely-wrought storytelling, Bouk makes an esoteric infrastructure utterly enthralling. Democracy's Data takes you on a captivating journey, peeling back layers to help the reader see what lies behind the numbers.

In 1787, the framers of the Constitution decided that the new federal government would count the population every ten years and use the results to apportion seats in the House of Representatives and Electoral College. 'We, the people,' the constitution asserts in its preamble, are the foundation of the American state. 150 years, 16 censuses later, the 1940 census continued to fulfill that mandate. But it turned out that the census did so much more. Dan Bouk has written an extraordinary book revealing just how prescient the framers were.

With a gift for stories and abundance of acutely probing questions, Dan Bouk brings the making of the U.S. census alive. In sharply etched detail, he shows how democracy’s data was produced: from the experts who wrote the census questions, to the politicians who tried to shape and exploit their work, to the millions of doorstep negotiations between census takers and their subjects where ordinary Americans worked to fit themselves into--or resist--its categories. The politics of numbers has rarely been told as grippingly before.

ARI BERMAN, author of Give Us the Ballot: The Modern Struggle for Voting Rights in America

The U.S. Census is one of the most important yet least understood parts of American democracy and Dan Bouk masterfully tells this story through rich characters, eye-popping data, and deep historical analysis. A must-read for students of history and politics.

Page by page, Bouk polishes the seemingly dull census into a scintillating thing, gleaming with stories and sparkling with insight. Democracy's Data is a must-read for anyone who wants to know how data defines our democracy and our lives.