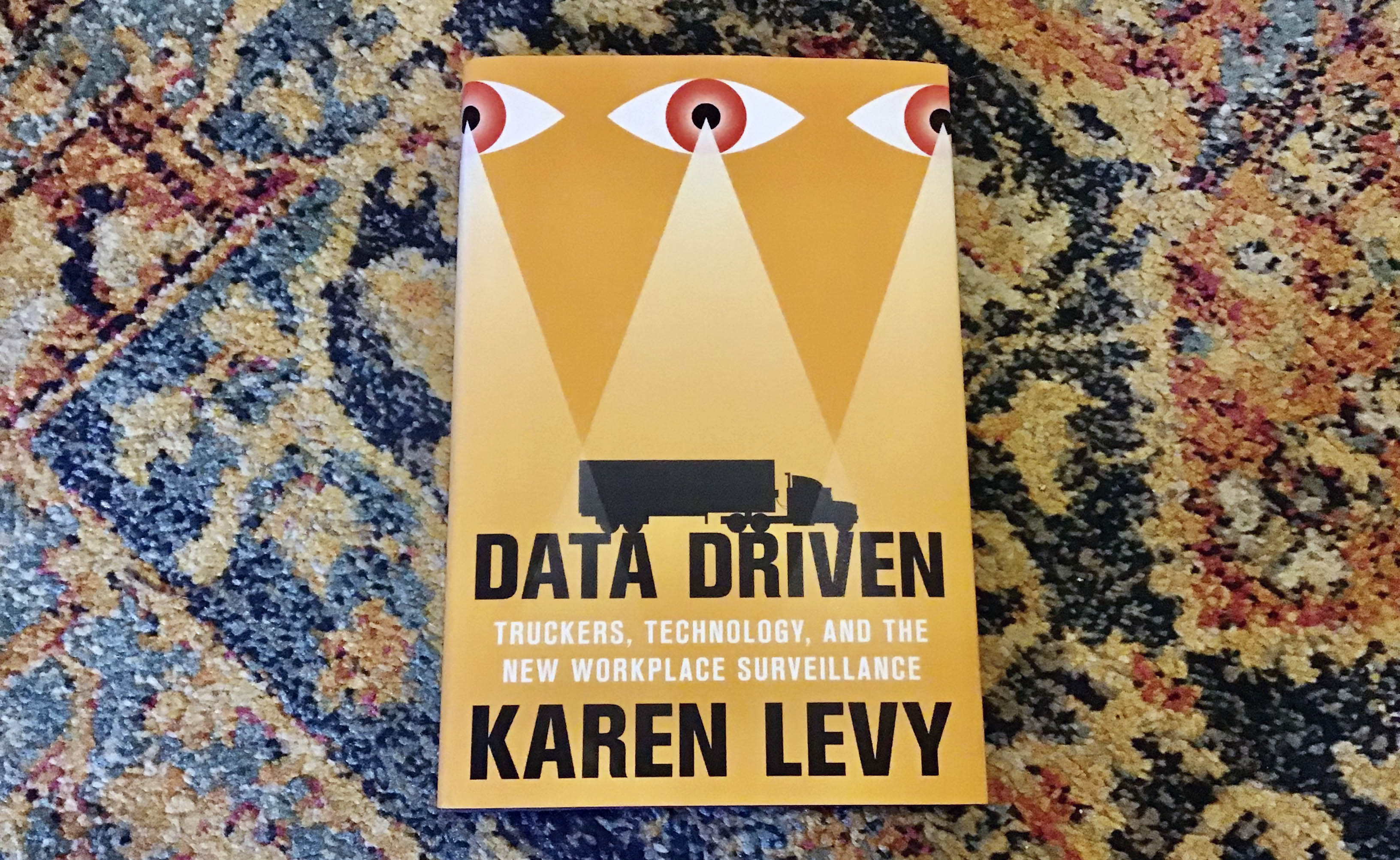 We have a problem: our society depends on trucking to get the goods we need from one place to the next. Those trucks run on major public roads alongside millions of other drivers and those trucks roll along with terrifying mass at significant speeds. (My kingdom for more trains, but that’s another post.) That situation—the existence of trucking—is not the problem though. The problem is that the industry running all those trucks has, since the late 1970s, driven down prices by driving down earnings for the skilled operators of all those giant rigs. To make ends meet, drivers put in 70 hour weeks or more, and they’re tired. We carry the resulting danger in common, all of us who ride the public roads.

Karen Levy’s Data Driven: Truckers, Technology, and the New Workplace Surveillance is best read in its entirety as an account of a major nation-wide attempt to solve the problem of tired truckers through technological surveillance, an argument for why tech cannot solve this problem alone, and a prophecy of more and more intense surveillance to come. And Levy’s book deserves a wide audience.

The heart of Levy’s story is a federally mandated transition to electronic logging devices (ELDs) from paper logs previously used to ensure compliance with laws limiting drive time and time on the clock. Those limits were meant to prevent drivers from working too much or driving too long. ELDs entered the scene as a tool to prevent fudging and fibbing. They made the rules stricter and supposedly easier to enforce. They were supposed to make the streets safer.

Levy details a host of unintended consequences, gleaned from talking to truckers and reading their trade literature, speaking with enforcement officials and reviewing official documents, and looking over the shoulders of dispatchers and trucking firm representatives. First, the ELDs did not lead to more citations for drivers out of compliance and probably not because more drivers became compliant: instead, inspectors and police found the new ELDs difficult to navigate. Savvy truckers, seeing the way that ELDs tended to get a pass at inspection stations before the mandate, even bought or fabricated fake stickers indicating they had an ELD aboard. (Levy calls this “decoy compliance.”)

A more troubling consequence came when truckers did install an ELD and lived by its rules. The strictness of the device met the pressures put on drivers to deliver their loads. Exactness pressed against desperation such that drivers took to the road at unsafe speeds or in unsafe conditions. They did what it took to get their miles under the unyielding, unforgiving digital wire. With records completed by hand, a driver could go slower, play it safer, and then lie on the log later if the hours didn’t work out perfectly. Not anymore.

New devices didn’t address the underlying causes of the tired driver problem. They did not ensure those drivers worked in safe conditions, with adequate pay and places to rest. Rather, they heaped on pressure while impugning the competence of professional truckers. Many of the most experienced, and safest, drivers took the hint and packed it in. When all was said and done, accidents under the new ELD mandate didn’t fall. They rose.

At the book’s close, Levy peers into the future. We might tell ourselves the solution to tired drivers is to speed up the exodus, replacing exhaustable humans with always-alert AIs. Alas, Levy convincingly shunts that off to the distant future, or maybe even never. Instead, she forecasts a dystopian cyborg enclosure of drivers who are already poorly paid and overworked. AIs will be involved, not as automatic drivers, but as tireless overseers: watching drivers, poking them to stay awake, and snitching when they break the rules.

Here, Levy’s earlier findings kick back in: tech, as ELDs, didn’t solve the problem. What would lead us to believe that more tech, more intrusive surveillance, would really make a difference?

Like I said: it’s worth reading all the way through.

And while you’re waiting for the book to arrive from your local bookseller or local library, check out the nearly perfect hour of radio that resulted when KQED’s infectiously curious Alexis Madrigal interviewed Karen Levy. The show takes full advantage of the wonderful catalog of songs that immortalize trucking life, and then come the callers! What callers! Really, you have to give it a listen.