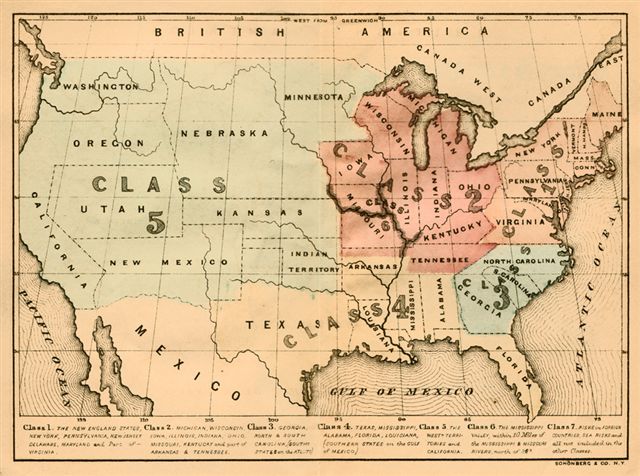 I found myself thinking about this map of the United States recently, from the foggy valley of a covid recovery. I was coping with my own pandemic encounter by reading about yellow fever in Kathryn Olivarius’ elegant, excellent, engaging new book Necropolis: Disease, Power, and Capitalism in the Cotton Kingdom. (This book was so good that I kept reading it despite the waves of covid fatigue!)

The book is about New Orleans and it wrestles with a puzzle: why did a city that served as a key node of antebellum American capitalism do so little to combat the threat of yellow fever, even as other US cities launched significant and successful public health campaigns to rein in similar epidemics? Olivarius offers a deeply researched and convincing set of answers, involving a city whose “acclimated” (fever-surviving) elites made fortunes by exploiting the labor of a steady stream of migrants (enslaved and free). Even many doctors benefited from the status quo, since it allowed them to charge epidemic-prices for questionable care and eventually graduate into the planter class. Some doctors even developed elaborate theories explaining (despite abundant contradictory evidence) that slavery was perfectly suited to yellow fever, and even that it protected enslaved people who would otherwise, as free people, be doomed to extinction by some supposed trait their race. The people on top, Olivarius explains, had little incentive to tax themselves for public works that might, in the long run, undermine their own privileged positions. As a result, we as readers encounter New Orleans as a charnel house: one that churned out cotton by bleeding dry the people it attracted and then let die.

Yet that was not the picture of New Orleans that most of its acclimated residents shared with the wider world. Olivarius shows us people writing letters to family around the nation defending their adopted home against claims of unhealthfulness or insalubrity. She shows how individuals mobilized their own stories of acclimation to downplay yellow fever risk (I made it! It wasn’t that bad!), or to claim that it was a disease that hurt those who deserved it (I made it! I was worthy!).

I know that Olivarius is right about such letters, because I saw them while I was writing my first book. It turns out that some of the institutions most interested in sussing out the health of New Orleans were life insurance companies, like Mutual Life of New York (MONY), which produced the map that began this post.

That map illustrates a scheme of classification that MONY adopted in the 1850s to encompass the United States regionally. Classes 1 and 2 contained the Northeast and the Midwest, albeit with some interesting surprises: Virginia, for instance, was treated like a northern state by MONY. Classes 1 and 2 enjoyed a privileged status. New Orleans fell in Class 4, where anyone who wanted to a policy had to pay a very hefty fee. MONY had some industry data to use to justify that penalty, but its actuary was also clearly influenced by cultural and political judgments. “In some States, the parties insured live simply and frugally and labor steadily and long,” explained the MONY actuary in 1854, before continuing with a thinly veiled condemnation of the South, its climate, and chattel slavery: “while in other States more bountifully favored in some respects, they toil less, live fast and soon accomplish their aim and—end.”

For Olivarius, life insurers’ penalties and judgments offer evidence of the truth about New Orleans: that it really was, for most people, a profoundly unhealthy place.

But I’ve always been just as interested in the rhetorical purpose of the data life insurers mustered, which was how I first came across defenses of New Orleans. In 1857, MONY’s southern agents and potential policyholders put pressure on the company to lower its punitive penalties for the region. MONY’s board had no intention of doing so, but it still needed an explanation—or, really, a justification. That’s where James Wynne came in.

MONY wanted “in order to avoid any imputation of preference or prejudice” a “Medical gentleman from a Southern State to collate and arrange the material thus collected and to make a report to the Company of the facts presented.” They chose Wynne, who was born in Utica, NY, but lived much of his adult life as a practicing physician in Baltimore. There he became an active public health reformer, wrote up his statistical observations on cholera, and even published a series of biographical sketches of Benjamin Franklin, Robert Fulton, Jonathan Edwards, Justice Marshall, David Rittenhouse, and Eli Whitney calculated to prove that “the human mind has suffered no deterioration in its transit across the Atlantic, and that…America was not deficient in contributing her quota to the development and the elevation of English literature.”

Wynne analyzed the materials MONY had received and collected, from regional doctors’ statistical treatises to public documents the company had collected—much of that material had been shared by precisely those people protesting the company’s classification map and regional penalties. Wynne did not draw on the company’s own (probably thin) evidence of policyholder mortality in New Orleans or the cotton South. In 1857, Wynne wrote and MONY published Report on the Vital Statistics of the United States Made to the Mutual Life Insurance Company of New York, which weighed in at 214 pages of text. The company published it in New York, but also London, Paris, and Madrid—it would not merely justify the company’s southern discriminations, but also generally advertise MONY and the US life insurance industry’s scientific sophistication.

In that report, Wynne made an important, if politically volatile, case: the divide between North and South was grounded as much in statistical laws as in their political equivalents. This was based on the collected evidence, but also a case that his life insurance patrons intended him to make. It justified MONY’s insurance map and the ways the company treated southern applicants and agents. As for New Orleans, Wynne determined that the evidence presented to him exhibited “a mortality without parallel in the United States, and show that there are causes in operation througout the State [of Louisiana] tending to render it eminently unhealthy.” (169)